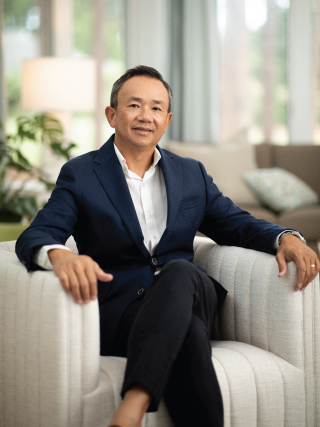 Most recently a leader at the renowned Savannah College of Art and Design (SCAD), Vo brings more than 20 years of experience across the worlds of interior design, architecture, and education to his new role.

The ASID CEO search committee began its work in early 2021, narrowing down an impressive field of candidates from the business and design worlds.

“In Khoi Vo, ASID found a ‘unicorn,’ with highly specialized experience and an effective and energetic style of leadership crucial for the organization’s growth and expansion in the years to come,” said Jennifer Kolstad, Global Design & Brand Director at Ford Motor Company, and co-chair of the ASID CEO search committee. “As ASID advances its mission to promote the value of interior design and its power to impact lives, Khoi Vo’s leadership will serve not only the Society, but the whole design world and public.”

“Khoi Vo brings all the qualities needed and more to lead ASID into the future—an understanding of our diverse membership, a practitioner with experience, a proven business mind, and a leader who can build teams and networks with a new perspective,” said John Cialone, FASID, and ASID CEO search committee co-chair. “We are excited for his stewardship to continue the work of promoting the value of interior design and our members in this new chapter of ASID’s history.”

“We are delighted to welcome Khoi Vo as the next CEO of the American Society of Interior Designers,” said Carolyn Ames Noble, Chair, ASID board of directors. “Khoi is well-positioned for this opportunity as a transformational global leader with dynamic experience in interior design, industry relations, business development and higher education. Khoi's collaborative approach to work is especially meaningful for ASID, as we uniquely work across all design practice sectors, in concert with our 21,000 members, 46 chapters, ASID staff and the national board of directors."

Vo has touched the design world for nearly two decades as both a designer and an educator. In 2002, he founded Studio Four Los Angeles, where he worked as the design director and designed and sold architectural products. He later founded Khoi Vo Design and operated as the studio’s design director for 12 years and oversaw all phases of the firm’s projects.

Vo began his career at California State University as an assistant professor for the interior design program. He later became a professor at SCAD’s department of interior design and later served as Chair. After a stint at the University of North Carolina at Greensboro, Vo returned to SCAD to head its former Hong Kong campus and then serve as the institution’s vice president for industry relations, a role from which he is stepping down from to join ASID.

Vo has received numerous awards during his career, with highlights including the 2015 Honorable Mention for the CIDA Award for Excellence in Teaching, the 2017-18 DesignIntelligence Top 25 Most Admired Educators, and a SCAD Presidential Fellowship.